It’s 4pm on a Thursday night and I’ve run out of planned dinners.

I have a choice, either get creative, or bundle up and brave the cold for a trip to the market.

The idea is to use items in the fridge and pantry, to come up with something satisfying.  Eggs and dried pasta are a staple in our home, so I often end up creating some version of a baked frittata, or a bean and veggie pasta.  I’ll incorporate leftovers from a previous meal (even a 1/2 cup of cooked beans, rice, or broccoli from Monday night’s dinner can become the muse for tonight’s). There are a variety of grains, beans, and rice on hand in my pantry, and I’ve noticed the container of *bulgur (see note below) staring out at me, the last several times I’ve reached in to grab something.

Bulgur and a box of grape tomatoes were the inspiration for this mashup of Greek salad and Tabbouleh; two of my favorite meals!

While traditional Tabbouleh typically includes mint, I focused on what was at hand; parsley and cilantro (which are two fresh herbs that I buy at the beginning of each week).  Don’t be afraid of substituting whatever herbs that you have available to you, when following a recipe.  Just chop and taste, and see if the flavors are appealing.

With an abundance of crispy vegetables and some whole grain, this salad is a perfect mix of high fiber carbs, protein and fat.  Even better, the soaking liquid for the bulgur, becomes a light and zesty dressing.

Top with chopped grilled chicken or warm chickpeas for a heartier dish.

The key to this salad (as with all salads), is to use the freshest ingredients available. Aged sheep’s milk feta, ripe tomatoes, firm cucumbers, and marinated greek olives provide bold flavors and textures.

All you need is a cutting board, knife and a glass bowl to make this impressive dish.

* Bulgur is made from whole grain wheat that has been parboiled, dried and cracked. The difference between bulgur and most types of wheat flours used in many packaged products, is that bulgur hasn’t been stripped (refined) of its bran and germ, which are where powerful nutrients are stored within a whole grain.

Place bulgur in in a medium glass bowl

Add chicken or beans if using

Serve at room temperature or refrigerate 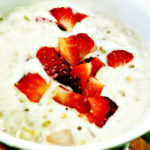 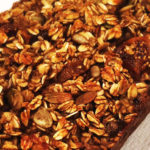